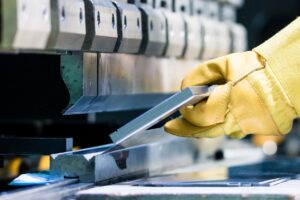 We all realise that time can mean money and having the right machines that perform tasks quickly can be vital, but it’s also important to look at the bigger picture. If those same machines take several operators to maintain that speed; is such a cost an effective way of working?

What if that same process could be done slower, better and much more safely by a single operator? Freeing up others to boost productivity and ultimately; improve overall efficiency.

There are two features of our CNC Sheet Metal Press Brakes that allow you that very option to assist with your every day Press Braking needs, slowing down the bending speed and the returning speed of plate as it is being folded.

But how can slowing down the whole process of bending material improve product quality, increase safety significantly and assist the operator?

As a Press Brake operator, you may be all too aware of the concentration required to handle materials safely (chin whipping, anyone?) this happens when bending long pieces, where the distance between the pivot point and the end of the plate means a big increase in the speed at which the plate rises in an arc, often very quickly.

As well as sore chins, this whole process can damage and deform material, particularly thinner plates, again due to the sheer speed at which it rises up and the lack of support while doing so.

With a slower bending speed, this effect is removed with long plates rising slower, straighter and with no risk of damage or deformation; it becomes a task that can be undertaken by one operator.

If you are folding thick, heavy metal plate, then the last thing you want is that plate being returned to you at speed, which could be potentially dangerous to the operators as much as the machine itself, with a standard return speed that is a very real risk, with a slow return speed the piece is returned much slower, with much less risk of damage, again a task that can be safely handled at a much slower rate, by a single operator.

What was once a two man operation can potentially become a much safer and manageable one person operation with the features that our CNC Press Brakes can perform. Even with much larger materials it is now possible to bend materials slowly and safely with just a single operator.

Selmech CNC Press Brakes support slow bending and returning speeds, see for yourself how much safer and more manageable this process could be for you and your business.